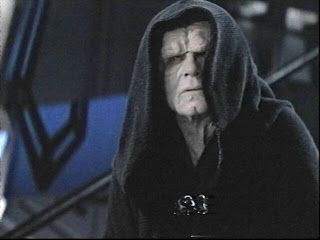 The value of Annual Reviews is a contentious subject, just ask Microsoft. In my view, so long as they are kept separate from pay reviews and form just a small part of the overall act of providing continuous feedback, I can see some value in them as a means to discuss long term progression.

A few years ago my company re-wrote our review template – I was concerned that my team might not take a great deal of interest in the new form, and heaven forbid, might not even read it before the reviews came about.

I felt that everyone would get more from the process if they had some idea of what to expect and how to use the template, so I filled in the form detailing the annual review that no doubt occurred between Emperor Palpatine and Darth Vadar in the aftermath of the original Stars Wars.

I share it here simply because I wish there was more HR material in the world based on Darth Vadar and Emperor Palpatine.

For those of you who consider the annual review to be an outdated process, bear in mind that this happened a long time ago in a galaxy far, far away.

During the past six months I have focusing on the construction of the Death Star with a view to using it as a tool to dominate the Galaxy. The project is extremely complex and I worked closely with key stake holders to ensure that the design and subsequent deployment match business goals and directives.

Separately I have been working closely with the Galactic Fleet to isolate and crush what remains of the Rebel Alliance. This has involved detaining and interrogating key figures as well as embarking on an extensive search across the out reaches of the Empire.

I concur with Vader’s comments. It’s also worth noting that Vader has been actively recruiting and restructuring the Galatic fleet leadership team.

How well did I perform against this objective?

I delivered a fully operational Death Star, which passed all user acceptance tests. It is true that the delivery was delayed and I put this down to the project management techniques employed in the early stages. Towards the end of the project I took a much more hands on role implementing a more iterative and incremental approach to delivery. In doing so it was possible to gain rapid feedback and ensure that value to the customer was maximised. Furthermore I made some tough decisions over poor performing members of the management team, introducing them to my ‘claw of death’.

I consider this objective complete, though note that following the destruction of the Death Star, we may need to build a new one.

I agree that a functional Death Star was delivered. I am pleased that I was able to set a vision and direction and that the manifestation of that vision became a reality. I am also very pleased with the aesthetics, it almost looked like a real Moon.

While I was disappointed by the late delivery of the project I am much more concerned how such an obvious vulnerability found its way through the design reviews. I would have expected that this would have been picked up pretty much form the off. I am also deeply concerned by how it became possible for the Rebel Alliance to steal plans for the Death Star such that they were able to exploit the weakness. Furthermore the destruction of the Death Star has damaged our reputation as a Galactic force – how a single manned fighter was able to implode an entire space station is the stuff of science fiction.

Objective #2 – Crush the Rebel Alliance once and for all

How well did I perform against this objective?

It’s fair to say that the Rebel Alliance cannot be described a ‘crushed’. I am happy with my overall approach, the Empire is very much in control of the Galaxy and the Rebel Alliance have not been able to secure an outpost, meaning that they are forced to move from temporary base to temporary base to evade a the might of the Galactic fleet. I feel strongly that it is only a matter of time before I have them trapped. That said I failed to account for key figures within the alliance, as well over looking a key vulnerability in the Death Star itself.

I will embark upon a Galaxy wide search for the relocated rebel base, and continue with the aforementioned crushing

I agree that your general approach was thorough and methodical. I would have like to see more outright annihilation of innocent people but overall I am pleased with your execution.

Where I am less pleased is that you failed to adapt your plan to take into account key events, specifically the rebel attack on the Death Star and Luke Sky Walker’s ability to evade attack. It is unclear to me why you were not able to land a direct hit even when pursuing him along a narrow trench and supported by two of the finest pilots in the galactic fleet.

3 out of 5 – Effective contributor

2 out of 5 – Low Contributor, I feel that your overall performance was not up to the standard that I would expect from a Lord of the Sith.

What I enjoy most about working here? I really like the almost unbounded opportunities to inflict misery and despair on pretty much anyone I like.

One thing I would change about Galactic Empires Inc. I think we need to review the weapons issued to our Storm Troopers, they seem faulty and rarely inflict any damage at all.

One thing I would like to see remain at Galactic Empires Inc. I think that our uniforms are pretty much the best in the industry. This is especially true for the Storm Troopers

What I do well: Inspire terror in others.

What I want to improve: Despite being a master of the dark side of the force, I am still unable to consistently smite Knights of the Jedi.

How I would like my career to develop over time:Long term I’d like to move into a Supreme Leader of the Universe role

I agree with Vader’s comments, in particular I am keen to help him to improve his smiting skills. While I do not see Vader’s wish to move into Supreme Leader of the Universeship as unrealistic, such roles do not come up often.

Next Actions:  Discover the location of the rebel base Time frame for achievement: Next April

Long term, Vader is looking to rule the entire universe, I see building the most devastating weapon ever created and crushing the only viable opposition as key stepping stones towards this goal.

Part 7: Record of discussion arising from the review discussion

During the meeting we discussed my rating of Vader’s performance. While disappointed he understands that the loss of the Death Star played a big part in my overall decision.

Remember kids, appraisals should be: